What are GCSEs and IGCSEs?

The General Certificate in Secondary Education or GCSE is a subject-based academic qualification taken by students in the UK at the end of their compulsory education in Year 11 (age 16). They are typically studied over a 2 or 3 year period, starting in either Year 9 or 10 depending on the subject, exam board or school and finish with a set of examinations at the end of the course.

The IGCSE was conceived in 1988, 2 years after the GCSE, to be more relevant to students learning in an international or non-UK context. The ‘I’ in IGCSE stands for ‘International’. 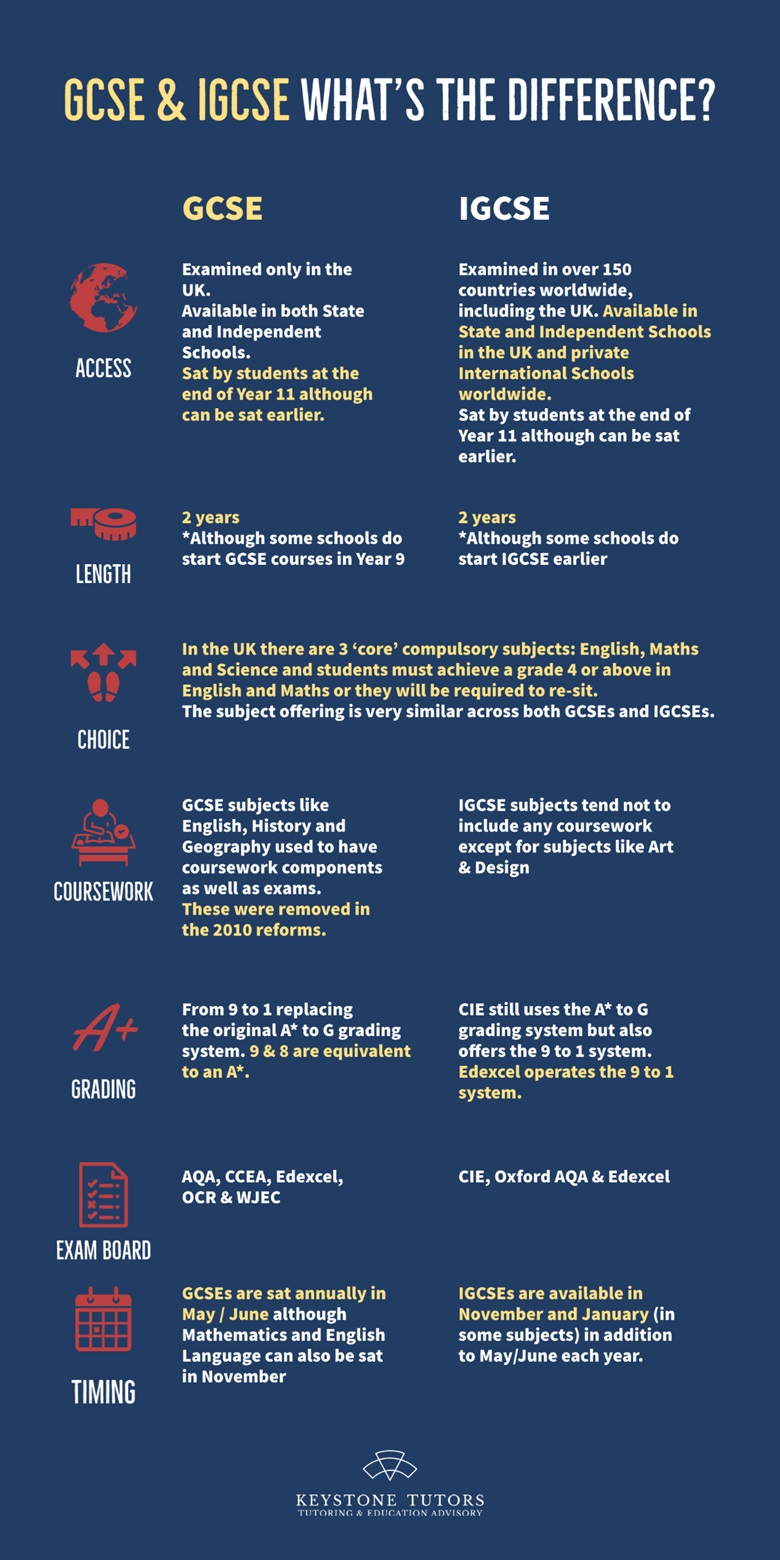 Is an IGCSE equivalent to a GCSE?

The IGCSE is recognised as the international equivalent of the GCSE. Both qualifications are studied and examined at the same point in the UK education system. Neither qualification has an age restriction and consequently they have been sat by many students younger and older. Both GCSEs and IGCSEs will affect the onward trajectory of a student and serve as the precursor to academic study in the sixth form, i.e. UK Years 12 and 13 for A Levels or IB.

Do schools offer both the GCSE and IGCEs?

This depends on where you are in the world!

In the UK it is technically possible for both state-maintained (i.e. government run) and independent schools to offer GCSE and IGCSE qualifications. However, in state-maintained schools IGCSEs are increasingly less prevalent, as the UK Government stopped including IGCSE results in the national performance data (i.e. league tables) in 2014, which ranks state schools on academic attainment in nationally standardised exams (i.e. the SATs, GCSEs and A Levels). In response to this most state-maintained schools have reverted back to offering only the GCSE.

Internationally, schools outside the UK are likely to only offer the IGCSE, as the GCSE is only really examined in the UK (although it is on offer in a very small number commonwealth countries, i.e. Canada and India).

How to choose your GCSE/IGCSE subjects?

If you attend a state-maintained or independent school in the UK the following subjects at Key Stage 4, i.e. Years 10 and 11, are compulsory:

The often referred to as the ‘core’ subjects. In the UK it is a requirement for students to achieve a Grade 4 or above in Maths and English GCSEs or IGCSEs, whichever they are taking. Students will need to retake examinations until they do so.

UK state schools are performance-measured against something called the EBacc, which is short for the English Baccalaureate. This is a set of subjects which is designed to keep a student’s future study options as broad as possible and therefore increase the likelihood of them being able to study at university. The EBacc consists of studying the following subjects at GCSE level:

Whilst studying all of these subjects is not compulsory, the UK government’s ambition is to see 75% of pupils studying the EBacc subject combination at GCSE by 2022, and 90% by 2025. Thus, most UK state schools will look to ensure their students sit all subjects in the EBacc, where appropriate for the student in question.

Outside of the ‘core’ or ‘compulsory’ subjects students are able to choose from a range of ‘optional’ subjects from four groups of subjects:

The range of the ‘optional’ subjects is often school dependent so do check with your school to find out what is on offer.

How many GCSE/IGCSEs should you take?

The core subjects take up 4 or 5 GCSE or IGCSE qualifications:

It is also worth noting that most UK based jobs have a minimum requirement of 5 GCSE grades (at Grade 4 or above) and as such this tends to dictate the minimum.

This said on average UK students tend to study 9 GCSE or IGCSE subjects.

When do I pick my GCSE subjects?

In the UK this tends to happen in the Spring Term in Year 9, the academic year in which a student turns 14 years old. In Key Stage 3, Years 7, 8 and 9 in the UK education system, students tend to study a broad selection of subjects allowing them to develop their subject interests in advance of having to select their GCSE or IGCSE options.

Is GCSE harder than IGCSE?

Historically IGCSEs were considered by many to be more challenging than the GCSEs. This was principally because IGCSEs tended to rely less on coursework than GCSEs. However, under Michael Gove’s (former Secretary of State for Education in the UK Government) reforms to the GCSEs, coursework elements were removed from many subjects which has led to the GCSE being viewed as much more rigorous. There is even suggestion by some that IGCSEs are ‘easier’ than GCSEs although this is a contested view.

Do universities prefer IGCSE or GCSE?

Both GCSEs and IGCSEs are recognised and accepted by UK Universities and they do not distinguish between the two qualifications and therefore treat them as equivalent qualifications.

If your child has difficulties with any specific GCSE or IGCSE subjects or topics, do get in touch so that we can find a GCSE or IGCSE Tutor to iron out the gaps.

Webinar: Getting Your Child Exam Fit

Keystone's Homeschooling and Courses Manager, Poppy Dundas, was joined by Professional Tutors Jon Gale and Lara Isaac. Lara is also a trained nutritionist and together they discussed how best to get your child prepared for the upcoming exams. Topics included keeping motivation strong, the best foods to eat, how to structure revision days, how to calm nerves and general revision tips and tricks.

How to get a 9 in GCSE English

Are you taking your GCSE English exam this summer and looking for advice on how to achieve a top grade?  In this article Michael has compiled some useful insights, tips and guidance on how best to prepare for the GCSE English exam and his top tips for achieving a Grade 9.

How to get a 9 in GCSE Maths

Are you taking your GCSE Maths exam this summer and looking for advice on how to achieve a top grade?  In this article, Keystone Tutors have compiled some useful insights, tips and guidance on how best to prepare for the GCSE Maths exam, top tips for achieving a Grade 9 and some interesting findings from the examiners reports.